Around 2009 or so I had a basic home theater personal computer setup. This involved a Linux PC, running XBox Media Center (XBMC) or somthing simiilar, and then some very basic home theater equipment, namely, a surround sound receiver and an HDTV. The TV was a Christmas gift from my father that cost around $300, an 1080p LCD branded as a Sanyo. The receiver was an RCA that was on sale from Meijer for $100. None of this is necessarily “high fidelity” but probably better in some ways than something older at the same price point.

The XBMC (now Kodi) played DVDs, rips of DVDs, YouTube, etc, and ran on top of Linux. The PC was connected to the TV via High Definition Multimedia Interface (HDMI) (or possibly just Video Graphics Array or VGA, I can’t quite remember, and possibly both and I could switch between them) and to the stereo system via a Toshiba Link (TOSLINK) optical fiber cable. Additional stuff included an IguanaIR USB infrared transceiver dongle with the receiver on the dongle pointing forward and the transmitters on wires taped to and blocking the infrared inputs to the stereo and TV. LIRC was used to unify control and provide automation of system and provide what now is general Consumer Electronics Control (CEC) type stuff. When the power it went out, it was like starting up Jurassic Park trying to get everything in sync and talking to each other again.

So I had a work aquaintance who had perhaps the opposite system in many ways… installed by professionals with theater seating, server rack, a touch screen tablet as a remote, and a very bright projector. He mentioned in passing that the system had room correction which I had heard of, so I read a bunch about it.

I spent a lot of time reading about digital signal processing and room correction. I kept thinking there had to be a way to do this stuff on a personal computer, and lo and behold, I eventually found a really great piece of software called the Room EQ Wizard available at http://roomeqwizard.com and it even worked on Linux. It isn’t open source it seems, but it is free for personal use. 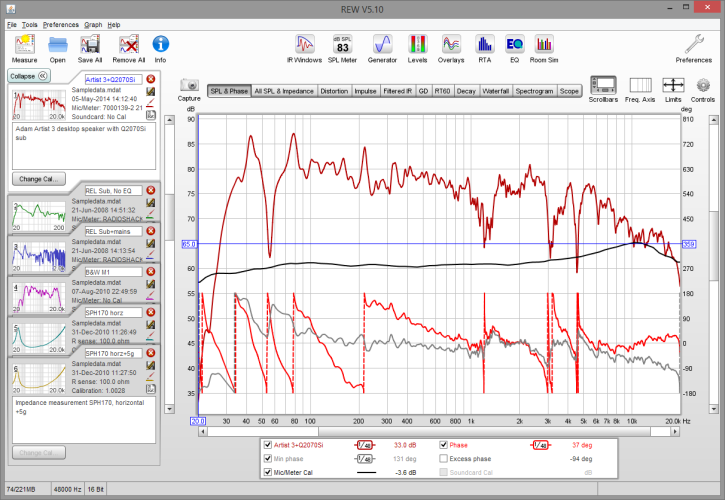 This software seemed to handle most everything I needed, although, honestly, I didn’t understand it all. But it certainly would perform a bunch of tone sweeps and record the output. For a microphone I think I had something sort of professional like… the Marshall MXL 990 and a preamp to go with it. This may be the reason why any of this was even remotely successful.

So I remember the graph being very very erratic! I was very surprised just how awful the frequency response seemed in the system, and the more I played with the tone sweeps, the more I heard the sweeps get quieter and louder at the very points the graph was saying it was happening.

The software seemed to have a lot of features as I mentioned before that I didn’t understand, but my understanding of the analysis part seemed fairly straightforward at this point. The software also allowed for making equalizer profiles or some such to save and use in other systems, but I didn’t have any of that. I just wrote down on paper the frequencies that I wanted to lower, took a screenshot of some of the graphs, and went nosing around about how to get the computer to correct its own audio output.

So as it turns out, while a lot of criticisms get lobbed at Linux and the myriad audio subsytems, it turns out it can be quite powerful once you dig into it. I had previously done some audio recording (hence the nice mic) and messed around with the real time Linux kernels and such to provide low latency, so I was a little familiar with several components. I was not using this system for audio recording, however.

Put simply, the Advanced Linux Sound Architecture (ALSA) supports the Linux Audio Developers Simple Plugin Application Programming Interface (LADSPA). This is the same software used by a lot of music recording software, and several hundred developers have created a rich landscape of audio software and plugins. But it was rather surprising to see that the sound card system itself supported these plugins. You can create a virtual sound card which has whatever plugins you want attached to it, and any audio sent to that virtual sound card will have the plugin’s digital signal processing applied first before being sent to the hardware. There may be a miniscule delay, but I managed to get a parametric equalizer plugin with the above found frequencies following a guide similar to the one at https://alsa.opensrc.org/Ladspa_(plugin) … Using an .asoundrc configuration file, and then making that the default audio output for XBMC, it all just worked. The .asoundrc file contained a list of the frequencies and the level adjustments in plain text as configuration parameters to the plugin. These plain text values correspond the GUI inputs as shown below. 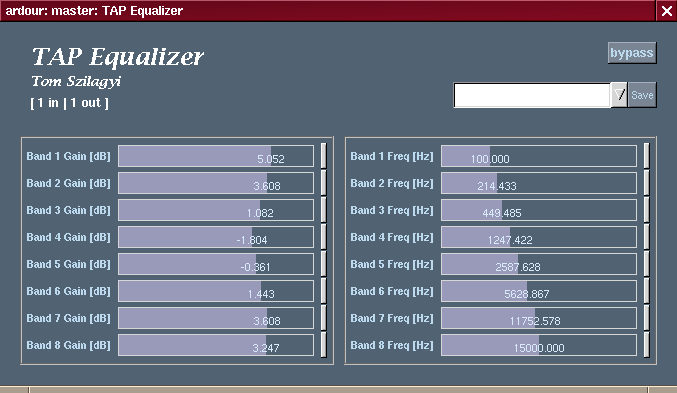 For such an uneducated attempt the results were astounding. I think I could tell after a few months it wasn’t exactly quite right in some subtle ways, but pretty much immediately after I enabled it I was able to lower the volume and still hear most every detail with clarity. This was something I struggled to do before and often had to have the volume at a bare minimum of 50% in order to hear speech correctly. Now I could get away with 15%.

The plugin did seemingly tax the CPU a little bit. I would often recompile software from source on that machine for other projects and if I was also watching a video, that would defintely (in addition to the file system businees from both the media being played as well as files being read and written) cause stuttering of the playback. But if I kept my nosing around from my laptop at a minimum while playing videos I could enjoy the better audio using some very basic equipment.

There are actually, as I’ve since come to find out, and also sort of knew at the time, quite a few problems with this setup:

You get what you pay for. I paid quite a bit in time, and I learned a lot, and I didn’t get an expert’s implementation, but with some amazing software written by others I managed to get a 80% solution that served me quite well. I’m not sure I’d recommend going this route however these days unless you just want to mess around. My current room correcting receiver produces superior results and while it is a refurbished unit didn’t cost much more than the system mentioned here… we are living the future and digital signal processing with dedicated chips is very inexpensive. If this sort of thing is interesting to you, I’d encourage you to keep googling, send me a pull request of additional ideas and resources, or get some books or take classes in signal processing. Get your amateur radio license too while you’re at it, there’s a whole world to digital signal processing for the amateur radio enthusiast these days with software defined radio and digital mode transmissions.

What do you think? Am I missing something very important that a beginner should know? Could, or will, this technique become even more ubiquitous? I have seen standalone DSP boards which can perform these operations and are very inexpensive. Why are these techniques not built into Televisions themselves yet, or our PCs and laptops? Perhaps it is overkill. Feel free to send me a pull request on this document if have anything to add.